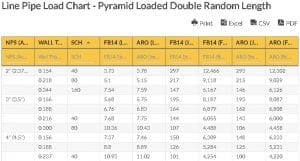 Line pipe are used to transport liquid like gas, oil, and petroleum. Thus, these line pipe are manufactured to withstand great pressures, as their use in the production of resources requires them to handle different amounts of tension.

They are designed to have high strength and durability to carry a variety of loads. The sizes and diameters of these line pipe consequently vary, as the amount of gas or liquid intended for the pipes vary as well.

Different loads on piping systems are identified so that line pipe will be able to withstand varying amounts of pressure. For example, the primary load on a line pipe system includes external pressure, internal fluid pressure, and gravity. Secondary loads include pressures that result from displacement due to thermal movements within the pipe.

Given these dynamics between pipe, pressures, and the resulting loads and sizes of pipe, the Line Pipe Load Chart serves as a guide to determine the number of pipes that will fit inside a truck in the arduous task of transporting them. (The truck type is specified in the chart below.)

The STD wall and XH wall are basically two of the most common abbreviations used in the line pipe industry. This is because they stand for sizing specifications  of such pipe. Simply, they mean “standard” and “extra heavy”, respectively.

These specifications also determine the wall thickness of the pipe. Next, it is important to note the difference between pyramid loaded and strip loaded. Pyramid loaded refers to transportation from the warehouse to the jobsite. AS the pipe are positioned within the grooves of one another, pyramid loaded transport offers maneuverability and addresses the risk of the pipes rolling.

Strip loaded, on the other hand, refers to transportation from yard to yard, as the pipe can be loaded or unloaded in larger quantities using forklifts. The double and triple random lengths basically refer to the length of the pipe from one to another. Lastly, the nominal pipe size refers to the set of standard sizes used for pipe.

Go here if you are looking for the Line Pipe Size and Weight Chart.

Please confirm deletion. There is no undo!