Skip to content
At the beginning of the month I pointed out that there are three components to the coming Energy Mess. The first of these is the steady increase in global demand for oil and its products, the second is the decline in production from existing wells and fields, and the third is the shrinking pool of places from which new oil can be recovered to make up the difference between the first two.

Internal demand gnaws away at that available for export, as the situation in Saudi Arabia clearly illustrates: 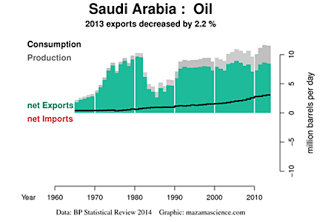 Internal consumption has now reached 3 mbd – out of a production of around 10 mbd, a trend bound to go higher, as the country’s population continues to grow, having risen from 20 million in 2000 to 28.3 million in 2012, with no significant change in rate apparent.

Back in 2011 Chatham House produced a report expressing concern over the future that this prefaces. The report began with this predictive plot:

It is regrettable to note that there is really no viable justification given for the assumption that Saudi production will rise from the current 10 mbd to the roughly 14 mbd that the plot suggests by 2020. Without that increment the world is going to be in quite a bit of hurt somewhat earlier than the above graph would suggest – as perhaps will be the Kingdom of Saudi Arabia. (Hopes for large increases in domestic production of natural gas seem to have foundered in their tight shales and are switching to efforts to develop the tight sand deposits although the mechanisms of gas flow may not be as advantageous in the sand. Similarly there is little in the report to explain why demand – once it reaches the current levels, should suddenly stabilize for three years before starting back up. Without that “hiccup” the dark blue line (which is already down to around 7 mbd, not 8) will rather continue downward, rather than the optimistic uptick that Chatham House predicted.

On the other side of the house China provides a clear example of the changes in global demand, with imports in 2013 having increased by 5.8% over 2012, and with consumption now above 10 mbd. 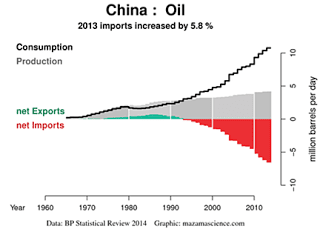 The other country where demand can clearly be seen to increase is India. The recent flattening of demand is likely to prove only transient, given the policies of the new government.

The Indian economy has been growing at around 7% a year since 2000 and the EIA anticipates that by 2020 it will become the world’s largest oil importer, even though overall demand will not surpass China’s – which is anticipated to rise to 15.7 mbd by 2025. Although a primary focus for the new government is to give every household at least one light bulb by 2019, a significant portion of this will come from solar power. This is particularly necessary in rural areas where there is poor to no grid service. However experience in Botswana would suggest that this policy can be more difficult to achieve and sustain, given the difficulty in getting adequate maintenance outside of the cities. The Energy and Resources Institute anticipates that growth will exceed 8%. (It should be noted that the Director-General of TERI is R K Pachauri – better known for his role at the IPCC). It might further be noted that while he was still Chief Minister in Gujarat before the election, the new Indian Prime Minister had raised the GDP of that state to an average of 13.4% in comparison with the national rate of 7.8%.

To a degree this problem of imbalance in the supply:demand situation that will develop in the next couple of years will be rectified by a change in the price structure of oil. Tightening of supply against even current levels of supply (let alone that needed to meet the July 2014 OPEC MOMR estimate of a continued growth in demand of the order of 1.16 mbd) will lead to an increase in price. It is that cost increase that will most likely impact countries such as India, who have, in the past, been bid out of a number of foreign oil investments by China, and who are likely to see that situation continue, of not get worse.

The presumption that Russia will be able to help China by exporting more oil East, while sustaining its exports to the West, is likely an unrealistic projection. Russia is already seeing their overall export levels decline, even before production itself significantly falls off, and the combination will tighten the market in the near future. 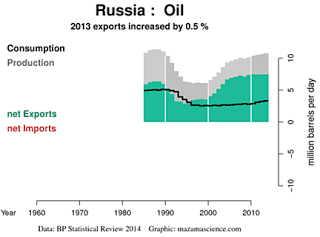 China is currently seeing an ongoing internal fight over the China National Petroleum Corporation (CNPC). Jiang Jiemin has been arrested and the investigation is progressing down his chain of command and influence.

CNPC is one of the world’s largest companies, with global operations and 2013 revenue of $ 432 billion. Its publicly listed subsidiary, PetroChina, trades in Hong Kong, Shanghai and New York and is the world’s fourth-biggest oil producer by market capitalization. Jiang ran both the parent and PetroChina from 2007 until last year, when he briefly headed the State-Owned Assets Supervision and Administration Commission (SASAC).

The arrests and investigations will likely slow the rate of Chinese investment in the foreign energy market, but is not likely to have any impact on internal energy consumption. Rather it may make it more difficult for China to sustain their necessary supply of oil as times become more troubled.

An increase in the price of oil, just as the links to foreign suppliers become questioned through this internal investigation that may spread beyond China, may weaken those links and give countries such as India an opportunity to achieve supplies that might otherwise be more difficult to achieve.